What can you say when you return from the summit of K2?

The superlatives used to describe the mountain are all very real!
It's tough—that's for sure. The weather here, which is known for being unreliable, lived up to its reputation and certainly tested our nerves. But let’s go back a few days.

On 16 July, we climbed to C1 and, on the 17th, pushed on to C2. We passed the House Chimney just before the bad weather hit and took refuge in our little tent, which I shared with Vibiriana and Nima. On the 18th, we put our huge down jackets on to climb to C3. I remember having a hard time of it in 2016, but conditions on the famous black pyramid were even worse this year. Halfway up, the wind was blowing in gusts and the snowfall was quite heavy, so the majority of the group decided to stop and set up a makeshift camp along the way. There were just four of us with our Sherpas who pushed on to C3 at 7,350m. It took us nine and a half hours to get there. Once there, we had to prepare the platforms, put up the tents, make water and eat something before falling asleep.

There was no point in going on until we received information that the fixing team had managed to open the famous bottleneck... Until then, we weren't going anywhere! We decided to stay put for 24 hours at C3, allowing the rest of the team to join us and the fixing team to continue its work. In the afternoon, a rumour was going around that the fixing team was coming back down as the weather was too bad... That certainly sounded familiar!! Then the rumour went around that the Sherpas were back at it and the climb to C4 the next day was confirmed!! Phew!!...

On 20 July, we set up the tents at C4, at 7,615m. There were still 1,000m to climb... The fixing team headed off again at around 2pm and we got ready and set off at about 8.30pm. The first part of the night was monotonous, with large slopes of snow to climb before it straightened out and we moved to mixed terrain. I lost Nima in the night and began the crossing below the Bottleneck's serac alone, telling myself that he would catch up. Then came the famous bottleneck itself. Conditions were good for the first part, with big snow steps, and then it straightened out again becoming nothing but ice. Ice axe, jumar, right crampon, left crampon, ice axe, jumar, etc... Don't think, keep going, ice axe, jumar, crampons... the fixed rope was there, thank god... I thought of Lama, Lakpa and Mingma who had put it up a few hours before – they’re the heroes! My calves were hurting—it was never-ending!! Then I finally arrived at the pass very tired and out of breath. A Sherpa told me, “your ox bottle empty didi!!” ... so I just had to wait for Nima!! Just then the sun came up, and I saw the summit ridge and said to myself... “I'm going to make it!!”

Nima and I reached the summit at 8.15am. We spent around 20 minutes at the summit to savour the moment. Photos, videos, tears, embraces... We stayed at the summit about 20 minutes before the weather turned again. At the pass, before beginning the descent, the fog was already everywhere. The danger of this place was already known, a member of the Japanese expedition had fallen to their death at this point in the bottleneck two days before.

At camp 4 I got my breath back a bit. At 9pm and having descended 3,500m with Noel, Ali and Pemba, we reached the base camp. Noel told me “you walk like a drunk woman!!” I was of course totally exhausted, but I still found the energy to eat a Dhal Bhat before collapsing in my tent!!! 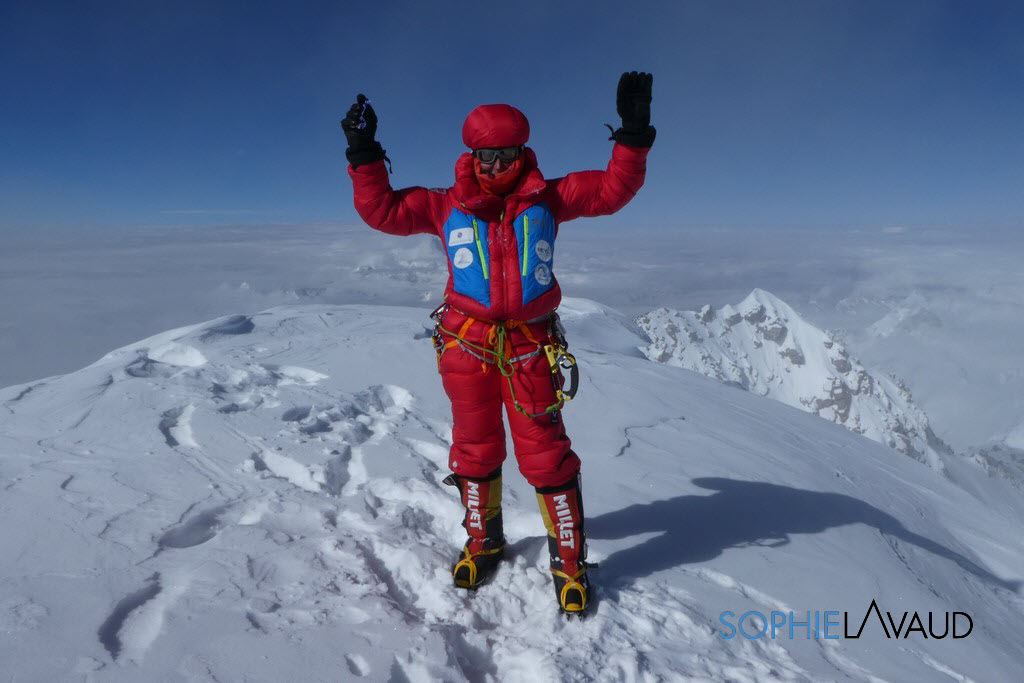 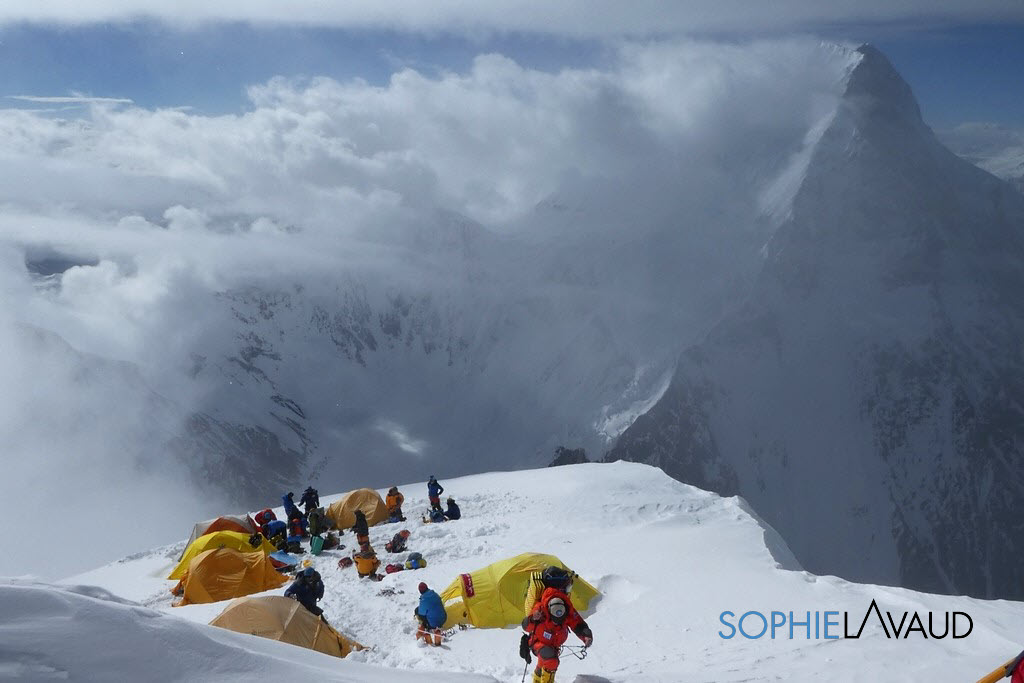 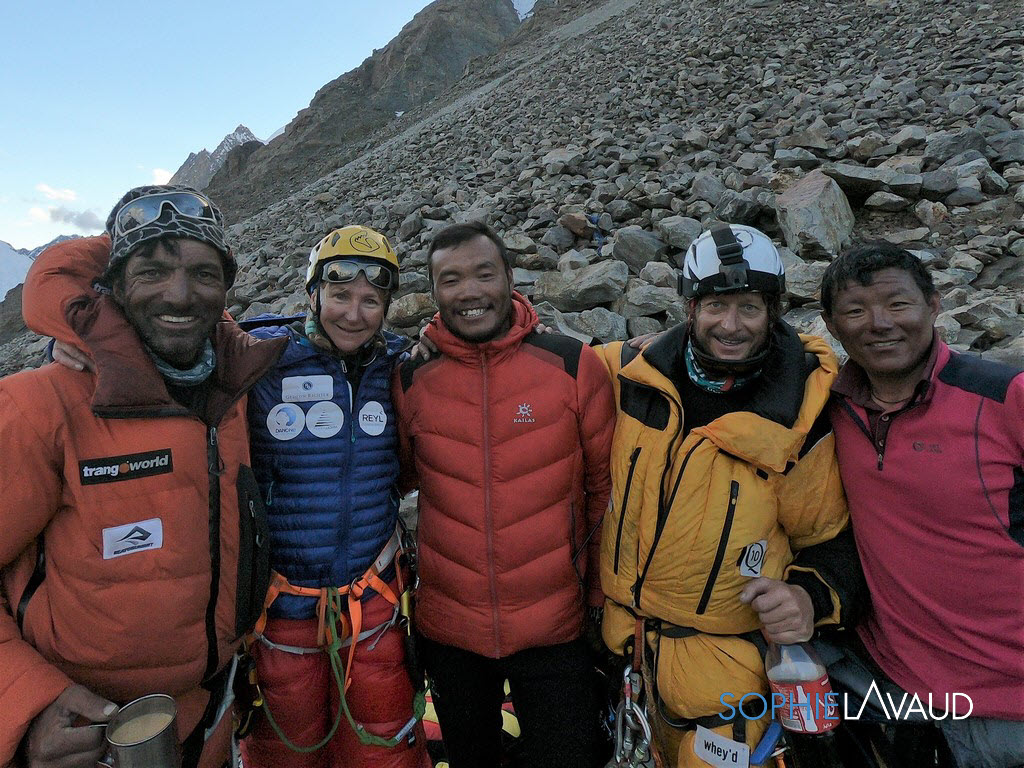 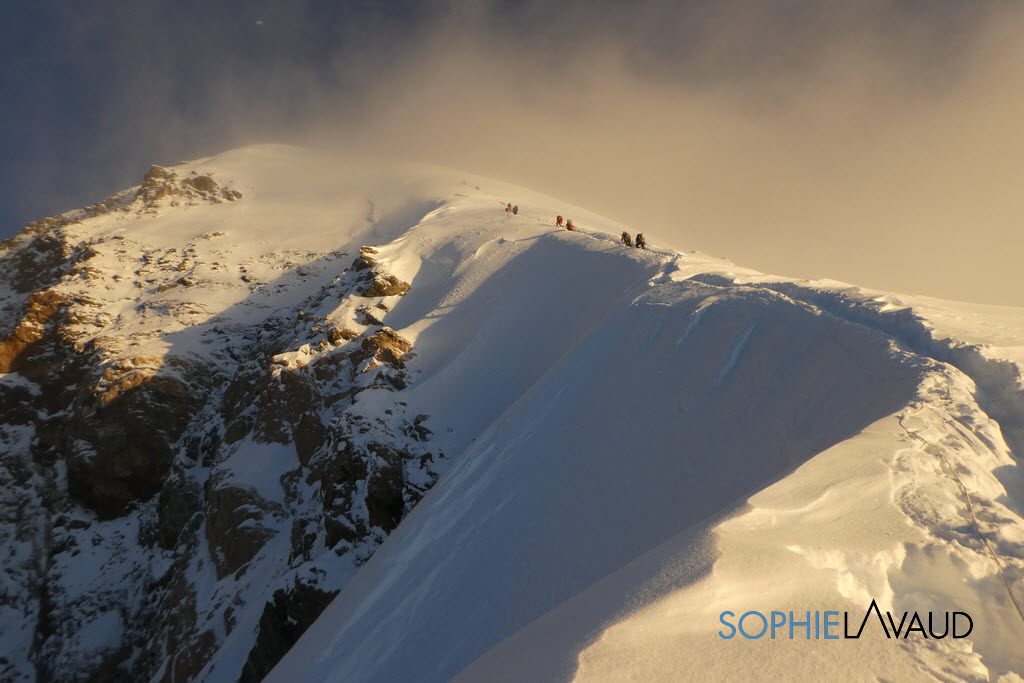